Want to shape your worship around This We Affirm? Try using the Living Lectionary.

Read to the below interview with Eric Elnes to find out more about the Living Lectionary. 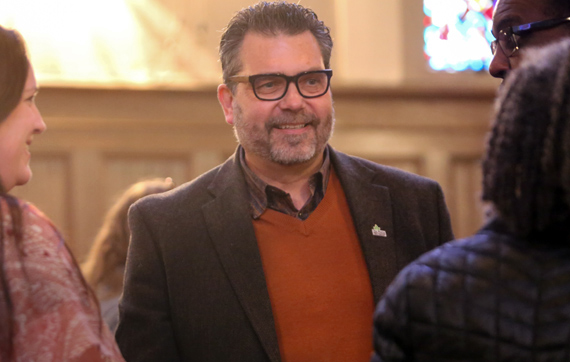 What is the Living Lectionary (LL)?

The Living Lectionary is a new, theme-based lectionary developed by SFTS’ Center for Innovation in Ministry in collaboration with the Convergence Network.  Unlike the Revised Common Lectionary, which many mainline Protestant churches have traditionally followed, the LL follows a set of twelve 6-week themes rather than a fixed set of biblical texts.  This allows churches to delve more deeply into some of the most compelling issues of our day while freeing churches to draw on wisdom from the entire Bible rather than a fixed set of passages chosen by a committee years ago.

What are the benefits of the Living Lectionary?

One of the many benefits of using the LL is that churches have significant opportunities to engage parishioners not only in worship, but in small and large group study as well, using their own materials or those produced just for the Living Lectionary from organizations like www.darkwoodbrew.org - often at an exclusive discount just for TheWeAffirm.org subscribers.  Given the 6-week thematic structure, each series becomes an invitation to go deeper in a group setting, creating a context that nurtures the growth of congregation’s educational ministry.

Another significant benefit is that the twelve themes covered by Living Lectionary are the very themes featured on the entire ThisWeAffirm.org website.  Thus, clergy and worship leaders have a access to a wealth of high quality resources that engage these themes as well as an entire community of faith leaders, activists, academics, and laypeople who are actively applying their faith to their daily life, their work, and God’s mission in the world.

What are the Living Lectionary’s twelve themes?

The LL draws its themes from the Phoenix Affirmations – a set of twelve ecumenically-developed affirmations concerning the Three Great Loves associated with Jesus’ “Great Commandment”: love of God, love of neighbor, and love of self (Matthew 22:34-40//Mark 12:28-31).   Developed originally by Christian clergy, laity, biblical scholars, and theologians across denominational lines, their purpose is to articulate the growing consensus among progressive Christians from a wide variety of backgrounds – including mainline Protestant, evangelical, and Roman Catholic – regarding the values of Jesus and how they may be lived with integrity in today’s world.  You can find more background on the Phoenix Affirmations, and the Affirmations themselves, on the This We Affirm website.

The website has been designed from the ground up to be one where anyone can post material under each of the twelve themes.  Material might be sermon videos or manuscripts, music, video clips, exegetical material, artwork, links to social justice work that engages with the themes, and so on.  Authors can choose whether to offer their resources for free or for a cost, and the user community has a chance to indicate which resources are most helpful.  By allowing any user to contribute resources, ThisWeAffirm.org and the Living Lectionaryoffer diverse perspectives that move a faith community to be less insular and more appreciative of the many ways God is moving people of faith in our world.  It also offers an opportunity to step into an entire community of creative, spirited folk who not only share resources with one another, but the values that that the resources reflect.

The Rev. Dr. Eric Elnes is a biblical scholar with a Ph.D. in Biblical Studies from Princeton Theological Seminary. He is also a leading articulator of Convergence Christianity and Senior Minister of Countryside Community Church (UCC) in Omaha, NE. He is on the Board of Directors of the TriFaith Initiative, bringing together The American Muslim Institute, Temple Israel and Countryside Community Church, all under one roof in Omaha. Eric has written several books on faith, theology and culture, including The Phoenix Affirmations: A New Vision for the Future of Christianity (Jossey-Bass, 2006).